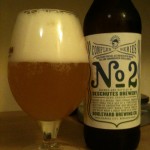 So I put on my robe and wizard hat tonight and ventured out to see the latest Harry Potter flick. I’m not much of a bildungsroman kind of guy. I haven’t seen the last four. No worries. HP8 was pure angst and action. Characters I was supposed to care about dropped like flies. People exploded. Banks defaulted. Monsters monsted. A good time was had by all. ‘Cept the guys that died, of course. Plus, Batman trailer. Made me want to cap the day with something fun, a white IPA: Deschutes/Boulevard Conflux No. 2.

Conflux No. 2 pours an opaque yellow with a light, bright, white head about a finger thick. An enigmatic, solitary question mark of lacing. Citrus hops, wheat, and coriander, with an underlying hint of black pepper on the nose. Sweet on the tongue, bitter orange, coriander, and pepper. Light carbonation against medium body. Refreshing, dry finish. A spicy orange wit done right.