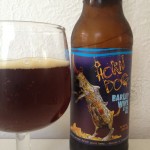 There is grief, and there is sorrow, but there is also recovery. As the old adage says, time heals all wounds. And the conspicuous absence of dog was becoming deafening.

So, coming up on three weeks ago, we adopted a dog. At the time, we didn’t completely realize we were adopting a dog. Following up on a lead, and after looking at a photograph online, we made a four-hour trek to Fresno, in the heart of California’s Central Valley, to meet a dog. The dog in question, a two year old Shih-tzu, had been found wandering the mean streets of Fresno, covered in dirt, matts, fleas, and ticks. No backstory, so the imagination runs rampant: Was she an escapee from a backyard breeder? A purloined pooch? A refugee left behind when the bank foreclosed on a McMansion?

Even though she’d had about two weeks of recovery time being nursed back to health in a great foster home, she was underfed, quite scrawny, with a badly sunburned nose and a case of worms. She’d been checked out by a vet, though, and given a clean bill of health. The vet was even 99% certain she’d been spayed, based on a scar along her abdomen and an ultrasound that didn’t reveal ovaries. “If she goes into heat in a couple weeks, you’ll know for sure,” joked a woman from the rescue organization.

And we fell for this dog. Hard. Within minutes of meeting us, little miss dog had curled up at my feet, resting her head on the toe of my boot like a pillow. We filled out paperwork and adopted the little beast, renaming her Elinor Phantom, and she came home with us that evening.

But Elinor also came with a surprise. Sure enough, a few days after settling in, Elinor went into heat. No worries there, and no blame, we’re always up for a challenge. We took Elinor to see our local vet, got her checked out, and made an appointment to bring her back in for spaying once her heat is over.

Now, I’ve had cats that were in heat, and they’re an agonizing bunch, vocalizing their wanton wants. If anything, a cat in heat is annoying. Dogs, on the other hand, offer their own unique challenges. Dogs bleed when they go into heat. Dogs are extremely emotionally needy when they go into heat. Typically, a female dog’s heat cycle consists of seven to ten days of bleeding, followed by a similar period of “flagging,” or twitching the tail to one side to indicate easy access. Other behaviors, including vocalization and mounting, may accompany this stage.

Go figure, Elinor is an overachiever. After two weeks of bleeding, she’s only just moved into the flagging stage. And given the fact that she spent a good portion of her time yesterday playing with, and attempting to mount, a female Dachshund, I’m half-convinced that my new dog may be a lesbian. Or bisexual. Or just not particularly picky. In other words, she’s a horn dog.

So tonight, In honor of Elinor’s hysterical condition, I’m having a Horn Dog Barley Wine, a high-octane (10.2% ABV) take on an English-style barley wine from Flying Dog Brewery, the Gonzo brewery with an aesthetic inspired by Hunter S. Thompson and a tendency to put artwork by Ralph Steadman on its labels. Horn Dog is an award-winning brew. Let’s see how it stacks up…

Horn Dog pours deep, opaque amber with notable carbonation and a thick, creamy off-white head with a tendency to leave respectable clumps of lacing on the glass. Roasted malt and burnt caramel on the nose, with an undercurrent of dried fruit–raisin and cherry–and spicy notes of anise. Unique and inviting. Taste is bitter up front, with hops strong and prominent, with malt sugars kicking in as it rolls across the tongue. Flavor profile follows smell, adding a touch of molasses and a hint of cinnamon to the dark fruitiness and licorice bite. Medium bodied and creamy, even syrupy, with the high ABV concealed nicely under the complex palate. Crisp finish, with lingering anise inviting another sip.

Originally reviewed on 07/12/12 at Bizarro Central.