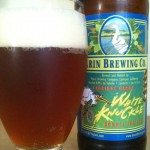 It’s a gentle madness, but a madness nonetheless. I’ll be walking through the grocery store, minding my own business, then suddenly I’ll hear the call of the cooler. Double IPA, it whispers. Double IPA. But Marin Brewing’s Eldridge Grade White Knuckle is not just a DIPA, it’s a “Double IPA Ale.” Shades of “ATM machine” or “PIN number.” But with that fistful of medals on the label, I won’t begrudge them a little redundancy. So long as the beer lives up to its “white knuckle” promise…

White Knuckle pours dark caramel orange (perfect for Orange Friday) with a knuckle-high head and Loch Ness Monster lacing. Nice malt sugar and woody hop nose. Fruity and malty on the tongue, with balanced bittersweet hop-resin stickiness. Moderate body, carbonation just beneath rolling bitterness. Bitter finish concentrated on the back edges of the tongue and back of palate. A little more easy-drinking than one would expect from a white knuckle ride, but a good ride overall with a solid kick.