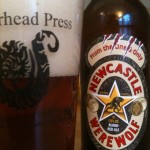 “I saw a werewolf drinking a piña colada at Trader Vic’s, his hair was perfect!” –Warren Zevon

It’s not often I find myself accosted by a werewolf while doing my grocery shopping. But I love a good gimmick, and this “blood red ale” from Newcastle had it all: clawmarks on the case, a lycanthropic logo, and “Escaped from Britain” on the label. So I went contrary to the advice I’d been given–“stay off the moors”–and picked up a twelve pack. Will it make me want to howl at the moon? Or am I going to want to put a silver bullet in it?

Werewolf pours a deep, rust red with a thick, foamy head that sticks to the glass forming fearsome faces in the lacing. A delicate nose: rye and malt and berry brambles. Bright and active on the tongue. Lots of carbonation. Understated flavor, but one that emerges as the beer warms to room temperature. A little biscuity. Malt sugar and sour raspberries, with a bitter rye wash. Dry, bitter, and hoppy finish. A little too watery, and the sour raspberry aftertaste may be a deal-breaker for some imbibers, but Newcastle Werewolf is not unpleasant, though it didn’t exactly put hair on my chest either. A solid B, well worth bringing to a Halloween party.