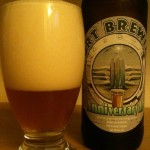 We just got back from Janine’s house and a 2nd of July backyard barbecue, and are now settling in and watching the Giants and Tigers on TV. And I had a Shock Top earlier with my black bean burger, grilled zucchini, corn on the cob, salad, and assorted appetizers, which was a nice little summer session beer, but I wanted to wind down with something a little more aggressive. Good thing I had something from Port Brewing on hand.

Port Brewing’s 5th Anniversary Ale pours bright, deep copper with a massive mustache-inducing head. Sticky lacing forms crystalline lattices down the sides of the glass. Understated aroma of citrus hops that comes out as it warms. Hop-bomb bitter bites into your tongue, then tap-dances across the roof of your mouth before cannonball-diving down your throat. Hop oils, pine needles, and burnt-sugared malt. Prepare to pucker. Lasting warm alcohol burn from the back of the throat all the way down. Like a hi-test DIPA, but without the I. Very SoCal. Makes me want to sit on the roof and stare at the ocean. But instead… baseball.