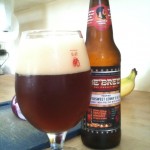 Does this beer smell funny to you?

Lenny Bruce is one of my heroes. A tragic hero, sure, not to mention an excellent example of how to be a bad example. But his insistence on fully exercising his freedom of speech: American Dream-level heroic.

And Bruce’s How to Talk Dirty and Influence People tops my list of recommended texts.

So I’ve been interested in Shmaltz Brewing Company’s tribute beer, He’Brew Bittersweet Lenny’s R.I.P.A., since I first spotted it in my local grocery store. This, in spite of my bad record with their Coney Island line.

That first time, I was denied. The glue on the four pack gave way, sending bottles tumbling like drunken acrobats to the beer aisle floor. This time, I did a little better. The glue held up until I got home and lifted the four pack from my grocery bag, then gave way, leaving the bottles standing at attention in the bag while I held the useless cardboard package in my hand, feeling like the magician holding the tablecloth while a twelve course meal languishes on the carpet. Ah, comedians.

But how’s the beer?

Bittersweet Lenny’s R.I.P.A. pours dark mahogany with a thick, tan head and visible carbonation. Toffee malt and rye on the nose, bright and sugary, with a light, herbal hop character underlying the grains. Big and bold, with a creamy molasses attack: candied citrus chased by rye bread and hop resin, which swells and bitters and leaves your mouth tingling as you swallow. Clean finish except for a lasting, smokey bitter deep in the throat. Aggressive, complex, and embarrassingly potent, just like a good dirty joke.