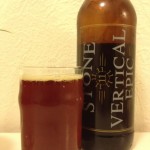 It’s been a wonderful Saturday, starting with a drive (down to The Country Vet, but you take what you get) with Jennifer and Maddie, moving from there to a bit of shopping (although the lamp I bought didn’t work), then to a little bit of work (more corrections), followed by a Maddie-led walk downtown (Straight to Petaluma Pie and Copperfield’s Books… what a dog!), and ending up in my chair reading a few stories, including the impressively chilling tales by Joseph S. Pulver, Sr. and Genevieve Valentine from the inaugural issue of Phantasmagorium. And, rumor has it, there still may be a slice of Maddie-versary sweet potato pie for dessert.

Beyond that, I’m having and (finally) reviewing Stone 11.11.11 Vertical Epic Ale, which has been available for a couple of months now. I know what you’re wondering, “how’s it stack up?” First, a little backstory…