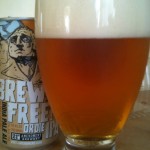 Hey, baby. It’s the Fourth of July. And I love this country, in spite of a few ridiculously bad ideas (Prohibition, anyone?). After all, change is part of her Promise. So I figured a selection from 21st Amendment Brewery was in order. What better than Brew Free! or Die? Rampaging Abe Lincoln on the label may have influenced that decision.

Brew Free! or Die pours a startling piss-yellow, with a tightly-packed off-white head. Once you get past color shock, it’s clean citrus hops on the nose, a little soapy, but very pleasant. Malt sugar on the tongue, but underplayed hop character. Big and bitter, but feels like it’s missing something quintessential to the achievement of the platonic ideal IPA. Very drinkable, nonetheless, with a nice, clean, bitter finish that invites another sip.