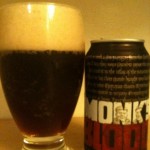 Monk’s Blood from 21st Amendment is a Belgian-style dark ale brewed with cinnamon, vanilla, oak chips and dried figs. Makes you wanna sit up and chant.

Monk’s Blood pours deep red-brown with a thick tan head and active, eructing carbonation. Figs, cherries, cinnamon, and vanilla on the nose. Dessert-like. Taste follows through on the promise of scent, with notes of sweet fruit, brandy, and fig newtons. Maybe a little too sweet. Thick-bodied and bristlingly carbonated. A touch of tart and sour on finish. No real hop bitterness; a candy or soda pop beer. Better than many fake Belgians, with none of the grittiness of an Ommegang, and the can is quite fun (if illegible).