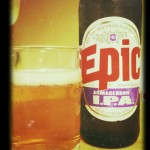 I’m having an epic day. Not only did I just realize it’s a three-day weekend, but I got word earlier today that Publishers Weekly have given my anthology The Book of Cthulhu a coveted starred review. In the book biz, that means you’ve done something right.

So I’m marking the moment with an Epic Armageddon IPA, which comes “All the way from New Zealand.” I’ve never been clear what was wrong with the old Zealand, but everybody I’ve ever known from NZ has been good people, so I’m more than willing to give this Kiwi version of an American IPA (with its 6.66% abv) a shot.

Epic Armageddon IPA pours bright copper with visible carbonation and a two-finger head that quickly falls to a ring of bubbles and scattered lacing. Hops, citrus, and tropical fruit on the nose: Pine needles, orange, lemon zest, and pineapple, with a toasted caramel character that emerges as it warms. A touch of skunky (lager?) yeast. Taste follows scent, adding pepper and malt sugar to the mix. Medium mouthfeel, creamy and warm. Lightly bitter finish. Not quite as bitter or aggressive as a California IPA, but pleasant and drinkable, though it has a disquieting yeasty aftertaste reminiscent of beers from Coney Island Brewing Co. Decent, but compared to the rest of my day, Epic Armageddon IPA falls a little short.