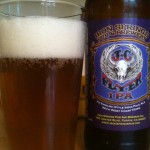 What a day! A parade, a ballgame (on TV), some errand running, and an awesome sandwich. Now I’m watching Beetlejuice with Maddie and knocking back a libation from Fairfax, CA: Iron Springs JC Flyer IPA. Named for the Bay Area country-rocker, JC Flyer is “an English style India Pale Ale with West Coast hops.” I’m afraid I’m not familiar with JC. How’s his beer?

JC Flyer IPA pours hazy amber with a finger-thick pale tan head, which quickly falls and leaves little to no lacing. The nose knows: it’s a Cali IPA, with citrus (orange juice?) and sweet, piney hops. Taste fulfills scent’s promise: sweet malt and grassy hop character. Suggestions of butterscotch. Mouthfeel is wet, maybe even watery, but balanced and refreshing. Nice astringent bitterness starting on the underside of the tongue, then rolling along the back of the throat with a light touch against the palate. Clean finish with a residual back of throat bitter burn. Very pleasant overall. Good enough that I may have to track down a JC Flyer record by way of saying thanks.