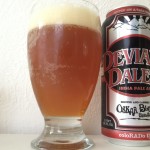 It takes about an hour, sometimes more, to drive from Petaluma, where I live, to the Dogpatch district of San Francisco, where the massive warehouse warehousing the Night Shade Books office is located. Depending on traffic, and other motorists’ habits of driving like idiots, this can be a monster of a commute. So I fill my time as best I can, listening to music, catching up on short fiction, or checking out new and engaging podcasts. One I’ve recently started tuning in to is John Harvey’s Dirty Beer Guy, “One tragically unkempt man’s journey through the wonderful world of beer.” Along with sidekick Jason Barrow, John weekly explores a grouping of artisan and craft brews, filling the hour-long show with plenty of humor, talk about movies and books, and, of course, beer reviews.

A recent show focused on a quartet of IPAs, including Stone Brewing Company’s Tenth Anniversary Ruination IPA, which I recently sampled and loved. Thing is, John and Jason are unabashedly stout and porter drinkers, and while I’m not typically a fan of schadenfreude, I found Jason’s reaction to the more palate-scowering aspects of strong, extra-hoppy IPAs hilarious, as he sputtered, swore, and suffered through every sip. “Fuckin’ hell,” chokes Jason at one point after sampling Ruination. “What kind of sick, demented human being…? You know, it’s the same people who wear latex and nipple clamps. Same people. If you’re drinking this, you’ve got a nipple clamp. I swear to god. Oh my god. Or a penis ring. One or the other. Jesus. God. Fuck. […] BDSM with your IPA with a high IBU and ABV, PDQ!”

Hey, I resemble that remark. Okay, so I don’t wear latex (too sweaty), but I do like bitter, palate-blasting hop bombs. Does that make me some kind of deviant?

Of course it does. But then, isn’t everybody a deviant? Doesn’t everybody got to deviate from the norm? And doesn’t deviation itself depend upon where one is standing? Contrast me with Willard “Mittens” Romney, the obscenely rich plutocrat currently running for US president. To him, I’m sure I come across as a deviant, with my long hair (put down the scissors, Mitt), tattoos, piercings, and tendency to hang out with freaky people like you, dear reader… or this guy.

But then, to me, Mittens, with his magical underwear, five grandmothers, and habit in college of dressing up like a cop in order to pull over and “meet” girls, comes across as a total deviant. Or worse…

Which brings me to tonight’s Thirsty Thursday offering, Deviant Dale’s IPA from Colorado’s Oskar Blues Brewery. An award-winning American craft brewer that cans, rather than bottles their beer in order to target a particular demographic of deviants–backpackers, mountainbikers, and pack-it-in, pack-it-out campers–Oskar Blues were the first American microbrewer to brew and can their own beer.

Deviant Dale’s IPA pours a deep, nearly opaque copper with a frothy white head and notable retention. Nose is peeling tangerines with a Xmas tree, tons of citrus and pine. Candied oranges and caramel on the tongue, with notes of white pepper and grapefruit. Thin-bodied and moderately carbonated, with a roof-of-mouth stickiness and lasting bitter bite. Easy-drinking, with a dry, refreshing finish.

Originally reviewed on 07/19/12 at Bizarro Central.