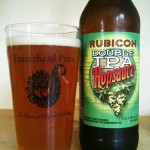 A nice, long walk this morning, followed by an exciting drive in Randy’s Jeep (which I totally plan to avoid driving in the future–no left arm space unless you hang out the window like a leadfooted Big Daddy Roth monster). A little bit of grocery shopping. Retail therapy. La Hacienda for dinner. I needed a cheese enchilada. Time to kick it: KCSM, a manuscript, and an adult beverage. Tonight, I’m cracking open a Rubicon Hopsauce Double IPA. Hopsauce? Promising.

Hopsauce pours a glowing rust-orange, but is about as headless as a Hessian horseman. Not much lacing, either: an occasional comma, semicolon, or em-dash. Pine resin and grapefruit peel on the nose. Sweet and malty up front. Complex citrus, pine, and toasted cereals. Medium mouthfeel, but a bit flat. Could stand brighter carbonation. Bitter kicks in as Hopsauce passes your molars, stinging your uvula as it goes down. And it’s a lasting, astringent bitter, too. Hopsauce is pleasantly saucy, but has a brutally bitter bite. Plan accordingly.