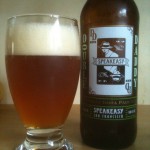 It’s been a while since I’ve had a Speakeasy, maybe a few years. Their Big Daddy IPA and Prohibition Pale Ale were a staple of Night Shade house parties circa 2007-2008. And you’ve gotta admire the tenacity of a San Francisco independent. Plus, shifty eyes on the bottleneck. So, how is Double Daddy?