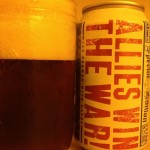 Veterans Day, Remembrance Day, Armistice Day, call it what you will, the holiday not only commemorates the end of the War to End All Wars (ah, if only that name had been more accurate), but also pays tribute to those who serve this country (too often giving all). Plus, it’s a whole lot of elevens–particularly this year. And who doesn’t like the number eleven?

I was hoping to track down a bottle of this year’s Stone Vertical Epic Ale to mark the date; alas, Petaluma Market didn’t get their shipment in time. So instead, I went with something that seemed just as appropriate to the calendar, a collaboration between 21st Amendment and Ninkasi, two brewers with distinct, enjoyable lineups of their own, called Allies Win the War!

Allies Win the War! comes in a can featuring graphic design that draws from newspaper headlines and a photo collage inserting the brewers’ heads onto the bodies of Winston Churchill, Franklin D. Roosevelt (not the first time he’s appeared on a 21st Amendment can–that would be their Fireside Chat winter warmer), and Josef Stalin at the Yalta Conference. It’s a bit cheeky, sure, but is very much in the same spirit as other history-invoking 21st Amendment labels (the rampaging Abe Lincoln on Brew Free! or Die comes to mind). Allies Win the War! is an “ale brewed with dates,” promising 52 IBUs and 8.5% abv from “California dates, an aggressive arsenal of Northwest hops and an unmistakable aroma of victory.” Sounds promising. But will it be a resounding and glorious victory, or a bitter one? Only one way to find out.

Allies Win the War! pours a rich, translucent ruby mahogany with a thick, full, off-white head that falls quickly from three fingers thick to about half a finger, leaving clumps of sticky lacing all over the glass. Citrus hops, pine, sweet malt, and dates on the nose, with a distinct suggestion of raisin bread fresh from the oven. Malt, dates, caramel, and orange zest on the tongue. Bitter citrus on the palate. Sweet, boozy, and warming. Heavy mouthfeel, creamed out by moderate carbonation. Clean finish, with a tinge of lasting burnt orange bitterness against the roof of the mouth. A big beer, dark, strong, and complex. A perfect winter warmer. Yeah, this one’s a winner.